Twilight, Vampire Diaries, True Blood and many more. All these are great “works  of fiction”. The makers, cast, crew, producer, director, writer and everyone involved in these programs are 100% Legitimate HUMANS. In spite of this obvious fact, thousands if not millions of teens (many adults as well) strongly believe that they can turn into Vampires. The credit goes to the excellent storyline of these so called sagas. The Vampire characters in these Tv Shows and Movies are depicted as Heroes who are strong, fast, having supernatural powers and Immortal. I must say this supernatural stuff is very entertaining but actually believing it is true is hilarious yet dangerous. I’ll get to the dangerous part at the end.

“I would like to confess, I always wanted some kind of supernatural power(when I was like 8 or 9) like most kids of my age at that time. I even used to tie a towel around my neck and roam around the house thinking I am Superman now.”

You’ll find YouTube videos where people confess of being a Vampire, sites that teach you how to become a vampire, various theories on different types of vampires and a lot of other freakish stuff. God knows if those people are smart enough making money  of this mindless stuff or they just need a psychologist.
On an average 33,100 people search for the term “How to become a Vampire” on Google each month. Around 1900 each month searches are for “spells to become a vampire”. When I calculated the total number of searches for become a vampire related terms, I was amazed to see how many people actually believe in this stuff. The number was 1,422,290 searches per month. 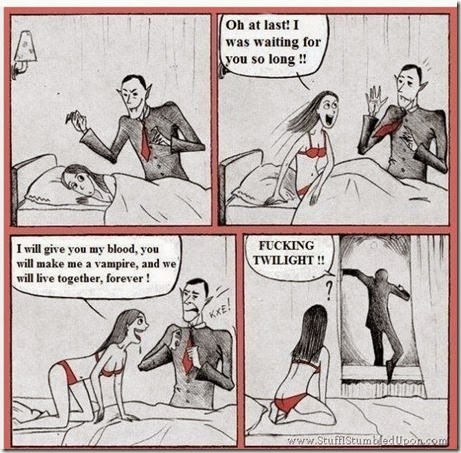 Maybe it’s just a teenage fantasy to be a vampire or have some kind of supernatural powers but  there have been several cases where this innocent teenage fantasy has turned into a life threatening danger. In 2011 a 19 year old boy named Lyle Monroe Bensley attacked a woman in her house. According to reports, he hissed and growled at the woman before attacking her. You can read the original article for this attack here.
In another report a 17 year old art student Mathew Hardman cut out a heart of a 90 year old woman and supposedly drank her blood as he believed he would become an immortal vampire after it. Now all he got is a 12 year imprisonment and a lifetime of guilt.
Many teens fail to understand that the TV shows, Movies and Books written on these supernatural phenomenon are in no way connected to any real world vampires. As I said earlier even the author of the books are real Humans.  Another reason behind some teens believing they are or can be vampires is actually a medical condition called Renfield’s syndrome. It is also called Clinical Vampirism, which is an obsession of drinking blood. However no one gets superhuman abilities or becomes immortal because of this syndrome.