Can Macs get Viruses like windows PCs or are they virus proof? Many people have asked me if you can get a virus on mac, even if they do not intend to buy an apple laptop or PC in a lifetime(There are reasons for that). Macintosh or Mac computers have such a reputation that there is a general belief that a Mac cannot get infected with a virus.


Some of the reasons for people believing that Macs are Virus Free are: 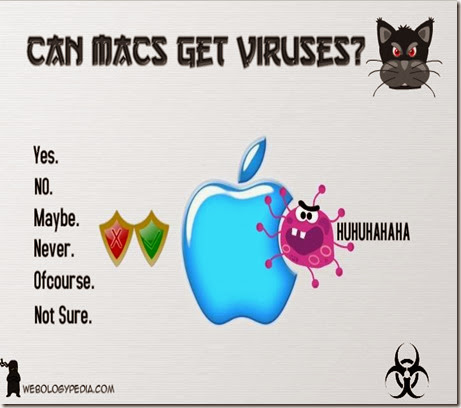 So, with such a permission structure and safe image amongst both users and non users macs must be virus free, right?
The answer is NO, Macs are not virus free and any apple computer or laptop can be infected with a virus. There was a time when Apple used to boast that there have been no viruses made for mac yet. This was a true statement however the reason was not that Mac computers are immune to all viruses, the reason there was no virus made for Mac was simply that there were so little Mac computers in the market(when compared to Windows based computers) that no one bothered to write a virus code for Macs.
Another reason virus makers focused on Windows and ignored Mac computers was that writing the code for Mac PCs is comparatively difficult. Because of the complex permission structure and Unix Architecture of the Mac laptops and computers the virus writing is a twisted job. However it is not impossible.
Recently, Apple computers have removed a line from their website in which they claimed that Mac computers aren’t susceptible to the thousands of viruses plaguing Windows-based computers. After a few virus attack claims on Mac pcs they have realized that a Mac computers might be safer that Windows based Pcs but they are not 100% immune to viruses.
“Every computer that runs programs or softwares can be affected with viruses as a virus is also a piece of program or software. The motive of a virus might be dangerous but it is still a piece of code or the computer.”