There are thousands of haunted places all over the world, where people claim to see or feel the existence of ghosts, demons or something supernatural.  However these experiences are not just limited to places only, people have had really creepy experiences with certain “Haunted” objects most of which always have a scary story attached with them.

The Dibbuk Box is one of the most famous things amongst the haunted boxes as a movie “The possession” also has been made inspired by its story. 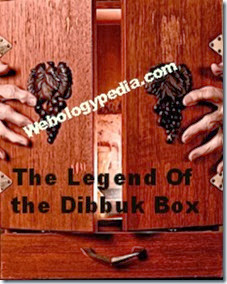 This is a Jewish wine box  that has gotten it’s name because supposedly a Dybuk( A type of ghost in Jewish folklore) lives inside it.  There is a very interesting story attached with this box. According to the story  the first known owner of this box was an old lady who also happened to be a concentration camp survivor. She was born in Poland and was sent to the Nazi concentration camps during World War II, she managed to flee from the camps and managed to live in Spain until the end of World War II. It was in Spain where she got this box. She brought this box to the US and lived in Portland Oregon until her death at the age of 103 years. She never let anyone open that box during her lifetime as she believed it has some evil inside it. She even had wished to bury the box with her after her death.

However this was against the Jewish customs so her wish was not fulfilled and the Dibbuk box along with some other stuff was put on a sale.  It was bought by an Antiques buyer Kevin mannis. When the buyer talked to the Grand-daughter of the lady who used to owned that box, he told her that she could keep the box if it has any sentimental value to her and he will not ask his money back. The reaction he got from her was quite the opposite of what he expected. She became kind of upset and told him that a deal has been made and he has to keep it.

The Antique dealer  took the box and put it in the basement of his furniture refinishing store.  Later he received a call from his salesperson who was very frightened and told him someone is breaking glass and swearing in the shop and she cannot get out as all the iron gates are locked. He reached the store as fast as he could and opened the locked doors, he found the salesperson sobbing at a corner and went in the basement to investigate. The lights were not working as the light bulbs were all broken and shattered on the floor. The smell of cat urine was prevailing there however no animals have ever entered in the basement. He found no one in there, even when there was only one way out. By the time he went back to the salesperson to ask anything she was gone and never came back to work. He still had no idea if the incident could be connected to the Dibbuk box.

Later he cleaned the Dibbuk box and found some weird items inside it( a lock of blonde hair a lock of brown/black hair and 2 wheat pennies). He took out the items and after cleaning gifted the box to his mother in a café while having lunch. She liked it first and while she was taking a look at it he went out to take a call. When he returned he found that she had suffered a stroke and tears were falling uncontrollably out of her eyes. Later he tried to ask her(while she was in the hospital bed only able to communicate by pointing to alphabets to form a word) what happened that day, she spelled the words H-A-T-E-G-I-F-T.

Still having no idea what she exactly meant the Antique dealer gave the box as a gift to his sister, his brother, his girlfriend and even sold it to a couple. Everyone returned it back to him with complaints like bad cat urine odor, doors opening by themselves. The couple returned the box with a note saying “this has a bad darkness”.

He started having a weird horrible nightmare which eventually turned out to be common amongst all the people he gave the box to. Weird things started to happen  to him like shadows moving in his house. He was afraid to destroy the box as he thought it would break free the evil inside it. So he put it on auction on Ebay.

Jason Haxton, Director of the Museum of Osteopathic Medicine in Kirksville, Missouri bought the box. He began having weird and horrible experiences like coughing out blood, strange noises. His son even saw a  black flame like mass with them inside the room while they were watching TV. After consulting with some Rabbis Haxton successfully sealed the Dybbuk inside the box and hid in a secret location he does not reveal to anyone.

2 Replies to “The Legend of the Dibbuk Box”