Is Time Travel possible? The logically correct answer would be Yes! We all are travelling “forward” in time with each passing second.  However the real question would be if going to a specific time that we wish to be in, is possible or not. 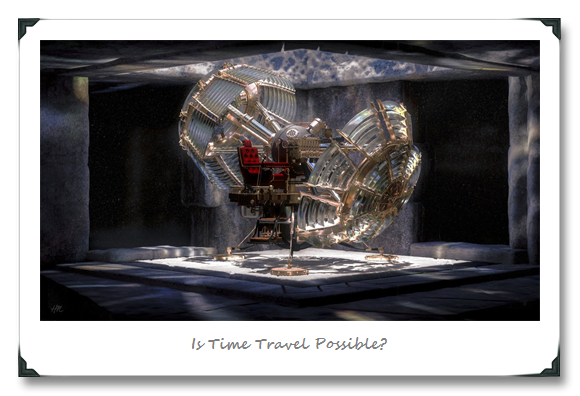 Till now we have seen the time travel phenomenon is science fiction movies and TV shows like Dr.who. The characters in these science fictions use some kind of time machines, enter the time, date and place and whoooop!, they are gone. It would be so good if it could be that simple. We would have gone back to the past and stopped all the terrible things from happening. Sounds nice, right? However this is far more complex than it sounds.

Question: If time travel is possible then why has no one come to us from the future?

PARADOXES
One of the things that makes time travel complex is a paradox known as the Grandfathers paradox. According to this paradox if a person goes to the past and meet his grandfather before his marriage and kills him or stops him from marrying by any possible way, this would mean that he would not have produced any children and thus the person killing his grandfather would not have been born. So if a person has not been born at all then how can he go to the past and kill his grandfather. This creates a complex paradox which seems kind of unsolvable.
Let’s take another example. Think of an event you want to change in your past. Your uncle gave you a nice little time machine as your birthday gift and you went 5 years back in time to stop that embarrassing event before it happens. So you stopped it, but if such an event never happens(as the future you has already stopped it) it means that you(past you) will never know about it. Thus, you will not feel the need to go to the past to change that event. And if you do not go back to change it, this will create a self contradicting loop.

Physicists have been searching a solution for this paradox from a long time. One theory is that for each choice we have in life, multiple parallel universes are formed based on our choices. So if you go back in time and change something, the change occurs in another universe and thus your present will not be affected.
However the idea of parallel universe(or universes) is complicated itself.  To understand the idea of parallel universe better, imagine your friends set you up for a blind date. You have two choices; either you can feel shy and ditch your date or you buckle up and go on a date. According to the theory of parallel universe you might be doing both of the above choices but in different universes. These universes would be exactly the same as this one but would be formed by each choice you face in your life. Which basically leads to two contradicting statements:

Now, these were the complexities of travelling back in time. Travelling forward in time might not be that much complex.

If all the paradoxes are ignored somehow, how can we travel in time?

Theoretically, there are two ways to travel in time.

Yes, you heard it right! Very soon, joining broken bones would be possible with the help of a “Super
Glue”. Currently the only remedies in case of a broken bone are mechanical fixes, such as screws, pins, and plates, which can be an inefficient method for repairing highly fractured bones.

Bio-Engineers from University of Utah have been researching on the “Sandcastle worms” that build their homes with the help of this natural glue under the water. These worms live in  inter-tidal surf and  build tube-shaped homes by gluing together bits of sand and shell. The worm glue contains proteins and a substance named dopa which is said to be the most important ingredient of this glue.

This glue is also known as “Loctite 401 superglue”. The researchers have not yet tested the compound on live animals. It has been tested on cow bones from the grocery and the results have been good so far. Synthetic polymer is used in the glue being created by the scientists. However still they are facing some challenges which they need to overcome before beginning the testing on live Animals( and then humans of course).

If it works then it would definitely be one of the greatest discoveries in the medical history!!
Webologypedia.com
In the part one of this topic, I wrote about three famous UFO incidents, in Roswell(New Mexico), Siberia and India. Two of them seemed interrelated too,  however all of these were either forgotten or claimed to be fake and not related to aliens by the authorities. But what about the people who claim to see the Aliens?

There are thousands of people who claim being abducted by Alien beings. Are they telling the truth or just out of their minds? Most people don’t believe such claims. However there are numerous “Support Groups” who genuinely believe in these stories and help people involved in the abductions. 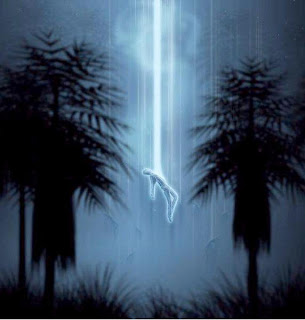 What could be a logical explanation for these stories and thousands of people believing in them?

So the question arises, Why would Aliens abduct Humans?

The most reasonable explanation  for this would be that the Aliens or Extraterrestrial beings are researching or maybe experimenting on humans. According to “Anomalous Mind Management Abductee Contactee Helpline”(AMMACH) around 1500 people are abducted by Aliens each year!! If they are right on this one, you better stay away from shining lights in the night 😉

According to the most popular theory, they are performing Human-Alien reproduction experiments. This theory came up as most of the abductees say that their bodies were examined, and sometimes sperm was taken.  Some abductees report having seen unusual looking babies, which looks somewhat like Alien-Human crossbreeds.

A woman named Stephany Cohen even claims that her “Alien Spirit Guide” not only offers her guidance but it also gives her mind-blowing orgasms when they sneak into her mind. She says her Alien Spirit boyfriend is from the Octopus race. However she was not abducted instead she says the Alien Spirits visit her at night.  Skeptics have a view that it has nothing to do with Aliens, instead this all is happening in her own mind..

There are many many stories with people claiming of abduction by Aliens. People have also described about different species of Aliens, there agendas etc. We will try to cover it in the next part  if possible..

When someone asked this question from Stephen Hawkins “the world-known scientist” he said that it is certain that Aliens exists but they might be dangerous.

You would see thousands and thousands of websites on the same topic. Some make sense
while some are total work of fiction. There are different views from different people on their agenda and description. And since it is a vast topic, this post would be a introduction only.

They are sometimes portrayed as evil predators(like the movie) trying to control the earth, and sometimes as friendly little Gray people helping humanity. People have even accused aliens of kidnapping and probing. There have been hundreds of UFO sightings, unexplained Crop Circles and many othe and theories which have raised the question, “Do Aliens  Really Exist?”

This incident took place in July 7, 1947, when an Unidentified Flying Object crashed on a ranch near Roswell, New Mexico. The local Roswell Army Air Field took care of the investigation and the remains of the object. 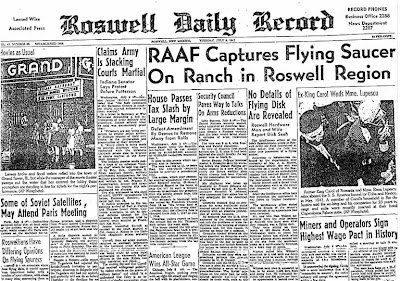 Later the US Army declared  that the object was debris from a high-altitude helium weather and surveillance balloon belonging to a classified experimental program named Mogul. Since then many people supporting the UFO theory in this case  maintain that an Alien Spaceship was found and its passengers were captured. According to them the military is just covering up to avoid chaos.

It is also said that an Alien autopsy was also done.

A Video claiming an Alien corpse buried in Siberia became a sensation all over the internet. This video had a million views on YouTube within  a week. It showed a big-eyed skeletal head, the humanoid body was thin and was less than a meter high with a missing leg. 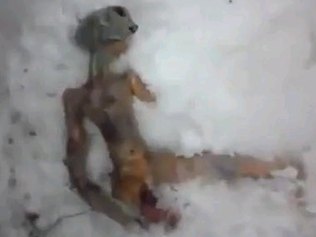 The location where it was filmed is near the village of Kamensk in the Russian republic Buryatia, just north of Lake Baikal according to the description in the video. The video on uploaded on april 14.  Local media had been posting Alien sightings in the area in march.

However later it was also claimed to be a fake video with  an Alien made up of Chicken skin filled with bread.  I doubt if making  such a recipe is even possible.

This is a case which is not as popular as the above incidents however I found it interesting as this sighting took place on May, 31, 1947 which is about a month before the Roswell incident.

Award-winning ‘pattachitra’ artist Pachanana Moharana, who runs a workshop in Puri,      had made sketches of the alien visitors and their spacecraft. And “NO” it was not Moharana who saw it himself. 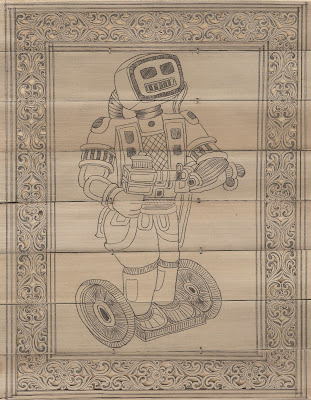 According to the story, two months before India’s independence, an UFO was sighted in the area. Two youths were also successful in getting access inside the spacecraft. And after the departure of the spacecraft, these youth sat with a well known “Tala- Pattachitra” ( palm leaf engraver) artist giving description of the alien beings they had met – a variety of anthropomorphic robots, or perhaps creatures in metal suits.  They have been called as “yantra-purusha” which means a machine man, sounds like someone wearing a spacesuit.
India was going through a struggle for independence  at that time so this news was long forgotten.
There are many other interesting Alien news and lore  so I will have to come up with a part 2( maybe part 3,4… ).  Meanwhile bookmark us and stay tuned 🙂
Hope you enjoyed reading!

Webologypedia.com
Wouldn’t it  be cool, if we can have a Car that can fly from the back of our house and take us anywhere we want, without the traffic and in much lesser time ?

I know it sounds like science fiction, but according to an article on BBC,  an ambitious firm has revealed their plans for a new type of personal air transport vehicle that takes off and lands like a helicopter.


Earlier this month, US aerospace start-up Terrafugia unveiled the TF-X, a concept design for a radical new type of personal air transport vehicle.

According to them the car would be able to take off and land vertically like a helicopter.
In car mode, the plug-in hybrid can rely on its electric motors and battery packs. 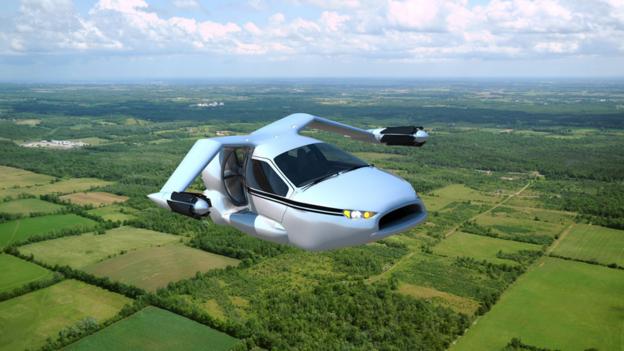 #  For lift-off it needs extra power from its hydrocarbon combustion engine.

#  Two huge motor pods on either side of the vehicle are pointed vertically up, and the propellers provide lift.

# Each pod has 16 independent electric motors, with its own controller and battery pack, meaning a failure is not catastrophic.

When it attains the required altitude the pods start to point forward. A ducted fan at the rear provides thrust and the wings start to operate as a conventional aerodynamic surface to provide lift as it accelerates.

When Can We Buy this?

Terrafugia originally hoped to be shipping its less radical Transition in 2009, but now says the first customers will take delivery sometime in 2015 or 2016. However I assume the TF-X design would not be available  in the market before the next 8-10 years.

Reservations are being taken for the TF-X, although its price tag has not yet been revealed. They have  quoted it at  $279,000, but the chances are it would cost more.
The Idea behind this car is undoubtedly fabulous and if not for the cost, I would have been the first to book this amazing  Flying Car.
P.S :-  If you are looking to buy anything(at all), please checkout our store(powered by Amazon).
We will be posting more interesting stuff. Thanks for visiting 🙂